Lama Thubten Zopa Rinpoche was born in 1946 in Thami, in the Mount Everest area, near Lawudo, where his previous rebirth had meditated the last 20 years of his life.

He left for Tibet when ten years old to study and meditate at Domo Geshe's monastery near Pagri.

Forced by the Chinese occupation in 1959, he fled to Bhutan. Somewhat later he went to the Tibetan refugee camp at Buxa Duar, India, where he met Lama Thubten Yeshe, who became his main teacher.

In 1967, both lama's went to Nepal, and the next year they built Kopan monastery (near Kathmandu) and Lawudo monastery. In 1971, Lama Zopa Rinpoche taught his first Lam Rim retreat-course, a tradition which is upheld every year at Kopan monastery.

In 1974, Rinpohce and Lama Yeshe began to travel around the world to teach, and to establish Dharma centers.

Following the passing away of Lama Yeshe in 1984, Rinpoche became the spiritual director of the Foundation for the Preservation of the Mahayana Tradition (FPMT), and he supervises all activities.

For many more details, see this page on Lama Zopa Rinpoche. 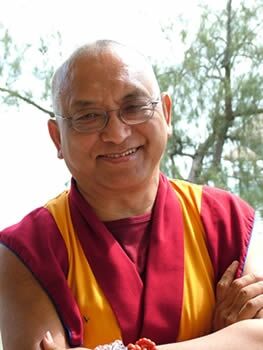